Two people charged with scheme to sell foreign nationals access to US politicians, including Trump 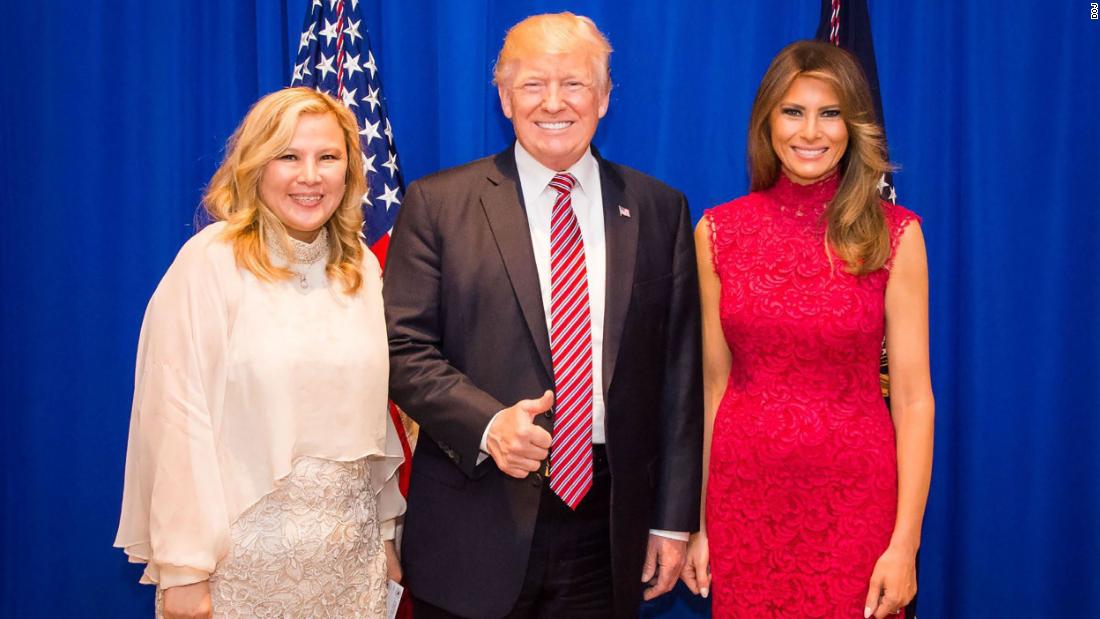 Sherry Li and Lianbo “Mike” Wang were arrested Monday and charged with wire fraud conspiracy, money laundering conspiracy and conspiracy to defraud the US by obstructing the Federal Election Commission’s administration of campaign finance laws in a complaint that was unsealed Monday. CNN has reached out to attorneys for Li and Wang for comment.

Prosecutors allege that Li, from her Long Island home starting in 2013, devised a scheme to defraud investors by convincing them to invest in a fake plan to build a private school. Wang allegedly served as the general manager of the fictitious Thompson Education Center, the complaint states, and Li and Wang allegedly siphoned off proceeds for their personal use including housing, vacations, clothes, jewelry and political contributions to prominent politicians.

Prosecutors have alleged Li and Wang acted as straw donors for foreign nationals to illegally give campaign contributions to support US politicians and political committees, including Trump, and that the pair used photos they took with Trump and former first lady Melania Trump to solicit investors to contribute to their project.

CNN has reached out to representatives for Trump and the Republican National Committee for comment.

“As alleged, the defendants enticed their victims to invest in a fraudulent scheme aided by misleadingly claiming that their fictitious project had the support of prominent politicians,” United States Attorney Breon Peace said in a statement.

“The defendants were able to perpetrate this fraud by then selling access to U.S. politicians by unlawfully contributing foreign money to political campaigns in their own names and bringing foreign nationals as their guests to fundraising events,” Peace added.

Seven of the foreign nationals who attended the event stayed at the same Washington, DC, hotel as Wang and Li, and their bill was more than $31,000, which prosecutors allege was paid for by funds from the Thompson Education Center project raised from foreign investors hoping to seek residency in the US.

Prosecutors allege that bank accounts controlled by Li and the Thompson Education Center entities received large foreign wire transfers that Li and Wang used to fund large political contributions that were required to attend the fundraiser.

According to the complaint, FEC records show that the joint fundraising committee received a $270,500 contribution in Li’s name and that “financial records reflect that this check was funded by multiple wires totaling hundreds of thousands of dollars received from Hong Kong-based banks accounts.” A review of FEC donor data from June 2017 shows a contribution for $270,500 to Trump Victory PAC, among other contributions.

The complaint also states that the joint fundraising committee received a check for $329,500 shortly before the event from Wang that “was funded by the same wires from the Hong Kong-based bank accounts” that funded Li’s check. FEC donor data shows a $329,500 contribution from Wang to Trump Victory PAC made in June 2017, among others.

As part of the scheme, Li and Wang allegedly solicited donations from foreign nationals falsely promising they would get lawful permanent resident status as part of an investor program, prosecutors said.

The EB-5 visa program allows foreign investors who make at least $500,000 in investments within specific parameters, which include stimulating the economy in high-unemployment or rural areas and creating jobs for US workers, to petition US Citizenship and Immigration Services for a conditional lawful permanent resident status, the complaint states. But projects that seek EB-5 investors are prohibited from guaranteeing that investors will be granted lawful permanent resident status.

The complaint alleges the pair raised at least $27 million from more than 150 investors as part of the scheme, and $16.5 million was raised from EB-5 investors “who were promised a green card in return for their investment.” Prosecutors allege that to date, no EB-5 investor has received a temporary or permanent green card, and instead, USCIS denied multiple requests for temporary green cards because it didn’t find the Thompson Education Center’s business plan credible.

Li and Wang allegedly planned to construct a cultural theme park in 2011, which they touted would be a “Chinese Disneyland” in upstate New York. Li allegedly told investors the project would create 3,000 jobs.

The pair are also accused of offering for sale shares of stock in business entities created by Li meant to raise funds for the education center, and they allegedly made false claims about the progress of listing shares for one of their companies on the New York Stock Exchange.

Prosecutors asked in a letter to the court that Li and Wang be released on bail only if they present a bail package with “substantial and meaningful assets,” surrender passports, fully disclose financial assets and holdings and adhere to strict limitations on their movements, calling them both “significant flight risks.”