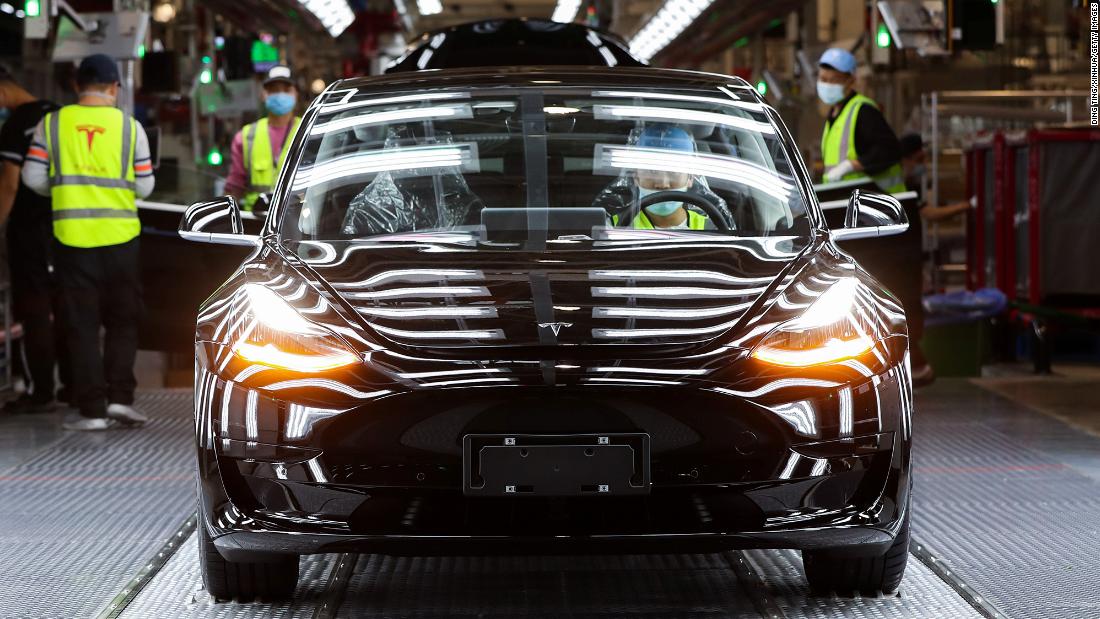 Earnings were better than forecast by analysts surveyed by Refinitiv, while revenue was slightly below expectations.

It also disclosed it had sold 75% of its bitcoin holdings, which it said added $936 million in cash to its balance sheet. CFO Zachary Kirkhorn said the company made a profit on the value of those sales, despite the sharp drop in the value of Bitcoin in recent months. But the company’s overall profit took a $106 million hit from the lower value of its remaining bitcoin holdings.

CEO Elon Musk said the bitcoin sale was due to the the need to have additional cash on hand to deal with the lockdown of the Shanghai plant.

“So it was important for us to maximize our cash position, given the uncertainty of the Covid lockdowns in China,” he told investors during a conference call Wednesday. “We are certainly open to increasing our bitcoin holdings in future, so this should not be taken as some verdict on bitcoin.” Tesla has not sold any of its dogecoin holdings, he added.

Tesla disclosed a $1.5 billion investment in bitcoin in February 2021. The crypto currency has lost about 50% of its value so far this year.

Musk has gotten more attention recently from his effort to buy Twitter, and his recent legal battle to get out of a deal that he agreed to in April.

During Wednesday’s call he was asked whether he anticipated changing his role at Tesla or the amount of time he spends focused on the company over the next three to four years.

“I’m committed to the long-term,” he said. “I’ll work at Tesla as long as I can usefully advance the cause of sustainability and autonomy.”

The company’s factory in Shanghai had to halt production for most of the quarter due to mandatory lockdowns in the city to combat a surge in Covid cases. Lockdowns across China also brought sales in the country, the largest market for car sales, to a near halt and disrupted the flow of parts from suppliers whose plants were shut down by Covid measures.
Tesla did open a factory in Texas early in the quarter and another in Germany in late March. But the ramp-up plans for those locations were affected by supply chain problems, prompting Musk to say during a late May interview that the two plants could only achieve a “puny” output of cars that made them “gigantic money furnaces. Right now, there’s a giant roaring sound which is the sound of money on fire.”

In Wednesday’s earning report, the company’s view on the output of those two plants was far more positive.

The German plant “reached an important milestone of over 1,000 cars produced in a single week while achieving positive gross margin during the quarter,” the company said. Previously, Tesla had said that June was the highest vehicle production month in Tesla’s history.

In comments to investors Wednesday, Musk described the quarter as a “kind of supply chain hell.”

“But in spite of all these challenges, it was one of the strongest quarters in our history,” he said. Tesla has “the potential for a record-breaking second half of the year,” although he cautioned that bullish forecast was “obviously subject to force majeure, things outside of our control.”

“The past [few] years have been quite a few force majeures,” Musk added.

Tesla has a target to grow global sales by 50% or more annually for the foreseeable future, and at the start of this year Musk said Tesla expected to be “comfortably above” that target in 2022. The company built and sold just under 1 million cars last year, so a 50% increase would represent roughly 1.5 million cars, but ended the second quarter having built and sold about 560,000 cars. Tesla would need to increase production in the second half by more than 75% to reach that 50% growth target for this year.

Still, even with the second quarter production and sales problems, CFO Kirkhorn said Tesla is “still pushing” to reach that target, an effort that “has become more difficult but it remains possible with strong execution,” he said.

Shares of Tesla (TSLA) were slightly higher in after-hours trading immediately following the report. The stock is down 30% for the year.