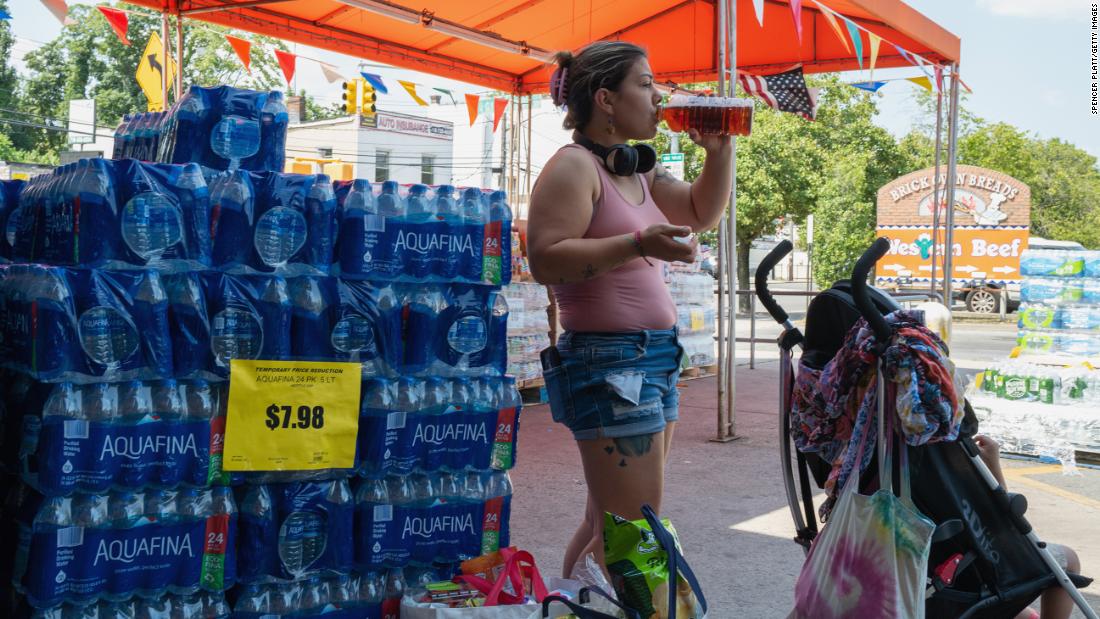 That has led public officials to warn: Get to a cool place and check on each other.

The most intense heat remained over the Southwest and the south-central US, with highs topping 100 degrees in some parts including Texas, where sweltering conditions have spurred record levels of power consumption.

Lawton, Oklahoma, broke a record for Wednesday’s date with thermometers reading 111 degrees. Another daily high record was set in Abilene, Texas, which saw 110 degrees. Other parts of the state including Austin, Del Rio and San Antonio also broke daily records with temperatures soaring past 100.

But parts of the Ohio Valley and the Northeast — including New York City, Philadelphia and Boston — were also under heat alerts Wednesday and are expected to stay hot at least through the weekend.

In New York, residents were urged to stay indoors in the coming days to avoid the “dangerous conditions that can lead to heat stress and illness,” said Jackie Bray, commissioner of the state’s homeland security and emergency services division. Most places in the state reached the middle to upper 90s, according to the National Weather Service.
In Boston, Mayor Michelle Wu declared a heat emergency through Thursday and announced at least 12 community centers will open to anyone who wants to cool off. More than 50 splash pads will be available at city parks and playgrounds, she said.

Philadelphia declared a “heat caution” from noon Tuesday to Thursday evening, urging people to avoid being outside from noon to 5 p.m. and use air conditioners or fans, the city said in an email to CNN.

The city’s public health department declared its first heat health emergency of 2022 on Wednesday because of “extremely hot conditions.” The declaration will active emergency programs including special field teams that conduct home visits and outreach for people experiencing homelessness, the city said in a news release.

A heat health emergency is declared when “the temperature gets high enough that vulnerable people — especially our elderly neighbors and family members — are at an increased risk of getting sick or dying from the heat,” health commissioner Dr. Cheryl Bettigole said.

And it’s not just the US: The climate crisis has been pushing weather to the extreme all over the world, with a searing heat wave also sweeping through Europe this week.
How to stay cool without air conditioning

For much of the south-central US, Wednesday’s heat only added to the brutal temperatures the region had seen in the past few days. In Texas and Oklahoma on Tuesday, a number of record high temperatures were set for that particular day.
In fact, Tuesday was the hottest day of the year across Oklahoma and western north Texas, with record temperatures set at Oklahoma City and Wichita Falls, according to the National Weather Service.
As of Tuesday, the Austin area had reached 100 degrees on 38 out of the last 44 days, according to the weather service.

“We’re asking people to conserve power so that the systems continue to operate,” Austin Mayor Steve Adler said Wednesday. “We’re asking everybody to do that so that we can get through this together.”

The heat is giving air conditioning units a workout. The Electric Reliability Council of Texas, which operates about 90% of Texas’ power grid, set a one-day record for power demand Tuesday, and another record was expected Wednesday, an ERCOT spokesperson said.

In Oklahoma, where temperatures topped 100 degrees in much of the state Tuesday, the extreme heat and drought have led to wildfires and rural water system outages, Oklahoma Department of Emergency Management and Homeland Security spokesperson Keli Cain told CNN.

The heat is helping cause water line breaks in some Oklahoma communities, which in turn is causing those communities to advise residents to boil their water. Because Oklahoma’s predominant soil type is clay, extreme temperatures constrict the soil, causing the ground to shift and pipes to break, according to the state Department of Environmental Quality’s water division.

In Arkansas, the city of Mountain Home reached 107 degrees Wednesday afternoon, according to the National Weather Service. “This would shatter the old record high of 102 degrees for this date set back in 2012. Official record reports are not sent out until midnight but it sure looks like a new record high,” the service wrote Wednesday evening.

As longer stretches of excessive heat have become more common, some local governments have hired chief heat officers to help navigate the response.

Jane Gilbert, chief heat officer for Miami-Dade County, told CNN’s Don Lemon on Tuesday that Miami now has nearly double the days with a heat index — what the air feels like — over 90 degrees than it did in the 1970s.

“And we’re getting many, many more days with the heat index, the more extreme levels of 103, 105,” Gilbert said. “That is not only concerning to people’s health but their pocketbooks. Our outdoor workers can’t work as long, they lose work time. People can’t afford this AC, the higher electricity cost. It’s both a health and an economic crisis.”

“Elderly, young children, people with certain health conditions can be more vulnerable to the heat. It’s really important to check on those people and make sure that they have the ability to take care of themselves,” Gilbert said.

David Hondula, director of the Office of Heat Response and Mitigation for Phoenix, echoed that sentiment, saying, “The heat can affect everyone, we’re all at risk.”

Heat is one of the top weather-related causes of death in the US, according to Kimberly McMahon, public weather services program manager with the National Weather Service.

“Heat affects everyone by limiting the body’s ability to cool down,” McMahon said. And high humidity only further limits that ability.

“Sweating removes 22% of excess body heat by redirecting heat towards the evaporation of the sweat,” CNN meteorologist Robert Shackelford said. “High humidity means that there is more moisture in the air. Since there is significantly more moisture in the air, it causes sweat to evaporate slower, which leads to a slowing down of your body’s natural ability to cool. That is why heat indices on a day with high humidity can feel significantly hotter than the actual temperature of the air.”

Too much heat and humidity can lead to heat-related illnesses including heat cramps, a heat rash, heat exhaustion “and — the worst of all — heat stroke which can result in death,” McMahon said.