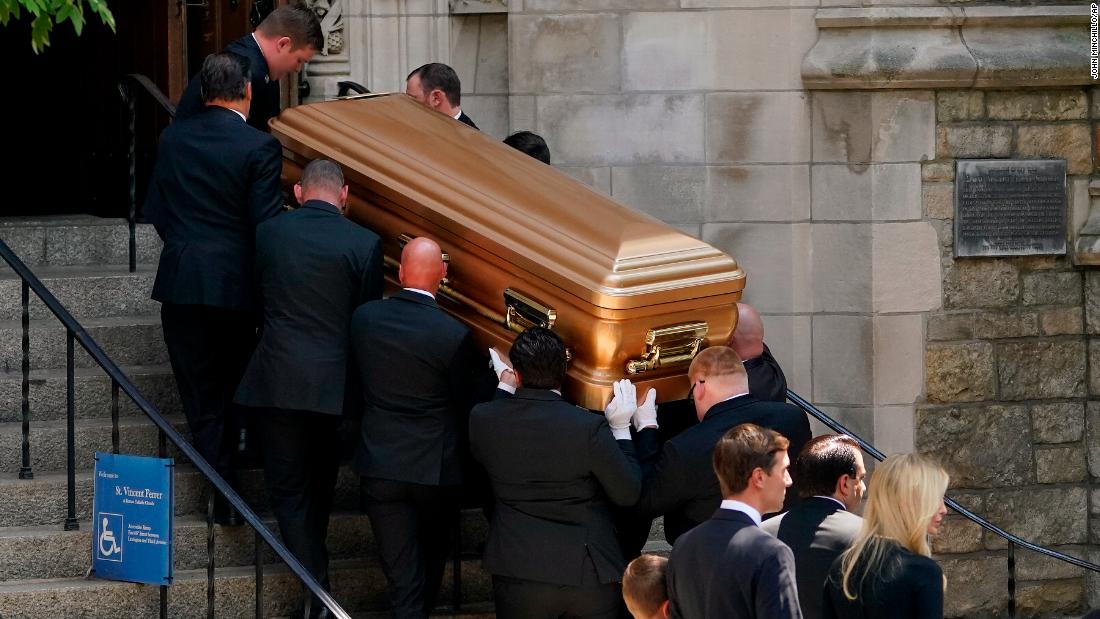 Funeral goers gathered at St. Vincent Ferrer Roman Catholic Church to remember the noted socialite. Former President Trump entered the church through a side entrance, and their children and their partners — Donald Trump Jr. and his fiancee, Kimberly Guilfoyle; Ivanka Trump and her husband, Jared Kushner; and Eric and Lara Trump — were also in attendance.

Ivana Trump died last week at age 73 due to “blunt impact injuries” to the torso, authorities have said.

Raised in communist Czechoslovakia, Ivana Trump partnered with Donald Trump on some of his most prominent real estate projects. The two divorced in 1992 in the aftermath of his tabloid affair with Maples.

When the couple finally settled, Ivana Trump walked away with $14 million, in addition to other perks like a massive mansion in Greenwich, Connecticut. She married and divorced twice more while maintaining a jet-setting, globetrotting lifestyle.

She once cited her “freedom” and “perfect life” as reasons for turning down an offer to serve as the ambassador to her native Czech Republic.

“I was just offered to be the American ambassador to Czech Republic — and Donald told me. He said, ‘Ivana, if you want it, I give it to you,'” Trump told “CBS Sunday Morning” in 2017. “But I like my freedom. I like to do what I want to do, go wherever I want to go, with whomever I want to go. And I can afford my lifestyle.”

“OK, why would I go and say bye-bye to Miami in the winter, bye-bye to Saint-Tropez in the summer and bye-bye to spring and fall in New York?” she continued. “I have a perfect life.”

The former President announced his ex-wife’s death on Truth Social, remembering her in a post as “a wonderful, beautiful, and amazing woman, who led a great and inspirational life.”

“Her pride and joy were her three children, Donald Jr., Ivanka, and Eric. She was so proud of them, as we were all so proud of her. Rest In Peace, Ivana!” the post read.

Her children, too, paid public tribute, with Ivanka Trump tweeting that her late mother “was brilliant, charming, passionate and wickedly funny,” adding: “She lived life to the fullest — never forgoing an opportunity to laugh and dance. I will miss her forever and will keep her memory alive in our hearts always.”

Eric Trump wrote in part on Instagram that his mother was “a force in business, a world-class athlete, a radiant beauty, and caring mother and friend.”

Zach Erdem, a New York restaurant owner and longtime friend, told CNN he was glad to have “so many memories” with her. “All she wanted is, like everyone, to live their life peacefully and be themselves,” he said.

This story has been updated with additional developments Wednesday.

CNN’s Gabby Orr and Kate Bennett contributed to this report.