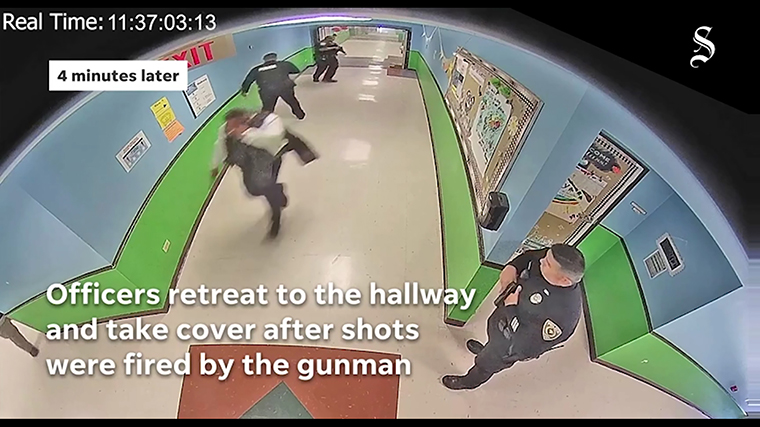 Newly published surveillance video recorded inside Robb Elementary in Uvlade, Texas, during the May 24 attack, shows officers approaching the classroom where Salvador Ramos killed 21 people, but then retreating down the hallway and taking cover the moment gunfire is heard.

The video was obtained by the Austin American-Statesman newspaper and published Tuesday.

The edited video first shows teachers screaming as the gunman crosses the parking lot of Robb Elementary School after crashing a truck just outside the property. Once Ramos is inside the building, hallway surveillance cameras show him walking down the hallway uncontested with a long rifle. Gunfire is heard as the gunman enters a classroom, and a child on the other end of the hallway is seen running.

The newspaper says it removed the sound of children’s screams from the video.

The first shots that appeared to be directed at responding officers are heard at 11:37 a.m. local time, sending the officers immediately running down to the other end of the hallway in retreat. Multiple officers are seen with their guns drawn in the hallway, but are not seen approaching the classroom again until 12:21 p.m., after four more rounds are heard from the gunman. The officers do not directly confront the gunman again until 12:50 p.m., killing Ramos.

The Austin American-Statesman released just under five minutes of what it reported is more than 77 minutes of video they obtained.

The Texas House committee investigating the shooting had already announced it would publicly release the full video on Sunday after showing it to victims’ family members. A source close to the committee tells CNN that plan has not changed.