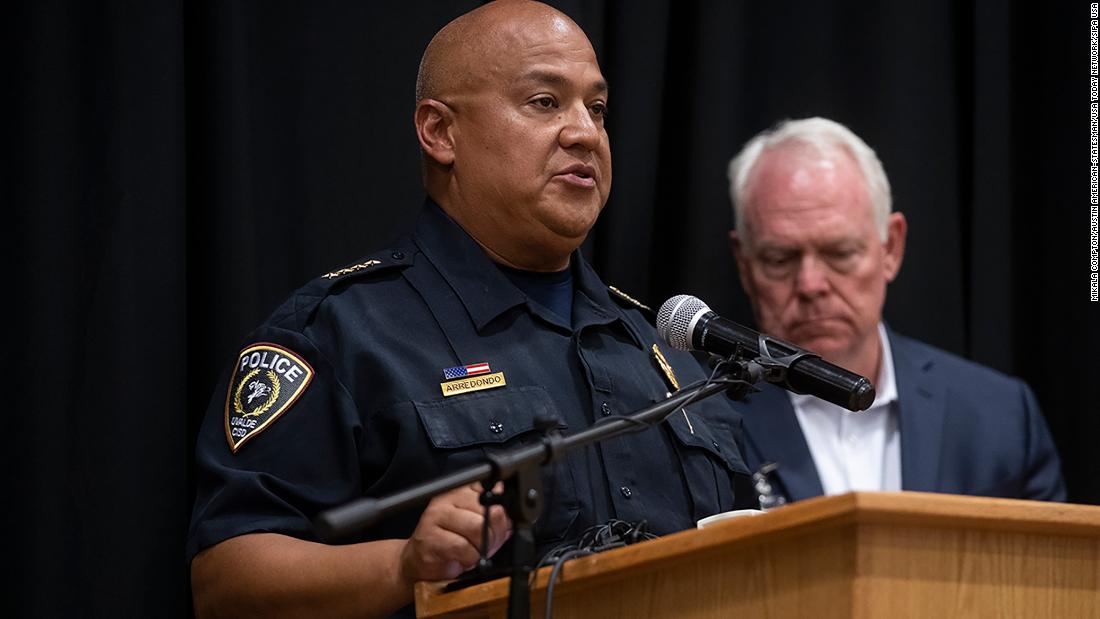 It is unclear what the direction the process might take, but it may leave Arredondo no choice but to resign, according to the source.

CNN has reached out to Arredondo’s attorney and has not received a response.

Arredondo, who has been the school district police chief since March 2020, was one of the nearly 400 law enforcement officers who responded to the mass shooting in which a gunman entered adjoining classrooms inside the Texas school on May 24 and killed 19 children and two teachers.

Officers arrived at the school within minutes but allowed the gunman to remain in the classrooms for 77 minutes until they finally entered and killed him, according to a timeline from the Texas Department of Public Safety (DPS). The lengthy delay contradicted widely taught protocol for active shooter situations that call for police to immediately stop the threat and came even as children inside repeatedly called 911 and begged for help.

In a hearing before the Texas Senate last month, DPS Director Col. Steven McCraw called the police response an “abject failure.” He placed sole blame for the failure on Arredondo, who officials have identified as the on-scene commander, saying he “decided to place the lives of officers before the lives of children.”

But Arredondo did not consider himself incident commander, according to a Texas House investigative committee’s preliminary report. “My approach and thought was responding as a police officer. And so I didn’t title myself,” Arredondo said in the investigative report.

The report instead placed blame more broadly, saying, “The entirety of law enforcement and its training, preparation, and response shares systemic responsibility for many missed opportunities.”

It also noted others could have assumed command.

Advanced Law Enforcement Rapid Response Training “teaches that any law enforcement officer can assume command, that somebody must assume command, and that an incident commander can transfer responsibility as an incident develops,” the report said. “That did not happen at Robb Elementary, and the lack of effective incident command is a major factor that caused other vital measures to be left undone.”

In the wake of sharp criticism, Uvalde school district Superintendent Hal Harrell placed Arredondo on leave from his position as school police chief on June 22.

“Because of the lack of clarity that remains and the unknown timing of when I will receive the results of the investigations, I have made the decision to place Chief Arredondo on administrative leave effective on this date,” Harrell wrote in the announcement.

Arredondo, who has worked in law enforcement for nearly 30 years, has not spoken substantively to the public about his decision-making the day of the massacre, but he told the Texas Tribune in an interview he did not consider himself the on-scene commander.

However, at least one of the responding officers expressed the belief that Arredondo was leading the law enforcement response inside the school, telling others, “the chief is in charge,” according to the DPS timeline.

Arredondo also told the Tribune he did not instruct officers to refrain from breaching the classrooms.

Separately, Arredondo resigned his position on the Uvalde City Council in early July, according to a resignation letter he sent to the city.

“After much consideration, it is in the best interest of the community to step down as a member of the City Council for District 3 to minimize further distractions,” Arredondo said in the letter. “The Mayor, the City Council, and the City Staff must continue to move forward to unite our community, once again.”