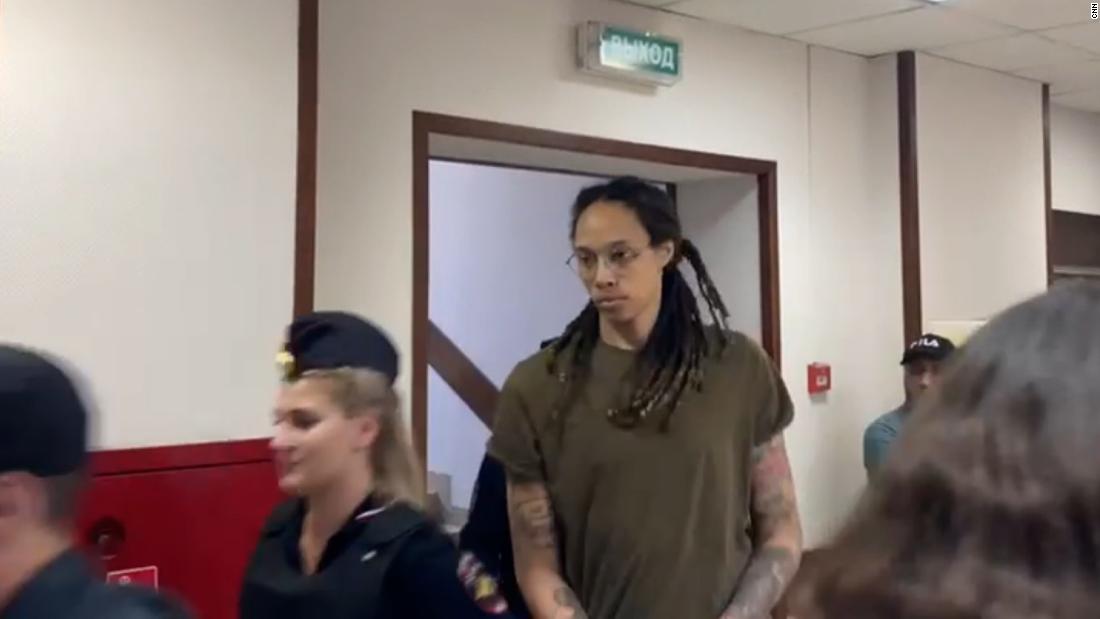 Griner was back in court Thursday, a week after pleading guilty to drug charges. The US State Department has said she is being wrongfully detained.

A former teammate along with the director of UMMC Ekaterinburg, the team for which Griner played in western Russia during the WNBA offseason, testified at the hearing. “Brittney has always been a good teammate, which is why my role here is to support her and be there for her,” team captain Evgeniya Belyakova said after the hearing.

Belyakova, a past captain of the Russian national team, added, “We miss her and her energy so much. I was very glad to see her. I hope the process ends soon and ends well.”

Team director Maksim Ryabkov also spoke on Griner’s behalf, saying he told the court “what a big role she played in the success of the Ekaterinburg club and Russian women’s basketball in general with her performances in the EuroLeague, how she raised our national rating.”

A statement from Griner’s defense team expanded on Ryabkov’s testimony, saying he “gave a positive description of Brittney Griner during his speech in court, noting her outstanding abilities as a player and personal contribution to strengthening the team spirit, which allowed the team to achieve the highest results in the Russian basketball premier league and in international competitions for many years.”

Griner’s contract with UMMC Ekaterinburg expired after she was detained. UMMC stands for Ural Mining and Metallurgical Company. According to Forbes, the team’s parent company was founded by Andrei Kozitsyn and Iskander Makhmudov, both of whom were included on a US Treasury list of political figures and oligarchs who rose to prominence under President Vladimir Putin.

Ahead of Thursday’s hearing, in a conference call with reporters, Kremlin spokesperson Dmitry Peskov declined to comment on a possible prisoner exchange including Griner and said that Russian-US relations had deteriorated.

Griner’s legal team was expected to request leniency as their client faces a sentence of up to 10 years in prison. Elizabeth Rood, chargé d’affaires of the US Embassy, attended the hearing.

The two-time US Olympics basketball gold medalist was arrested February 17 at a Moscow airport, a week before Russia invaded Ukraine. Russian authorities claimed she had cannabis oil in her luggage and accused her of smuggling significant amounts of a narcotic substance.
Thursday’s hearing came as many in the WNBA, along with other athletes, coaches and politicians, have called for Griner’s release over fears she is being used as a political pawn amid the war in Ukraine.

Griner wrote a letter to President Joe Biden that was delivered to the White House this month, saying she fears she will be detained in Russia indefinitely.

“I realize you are dealing with so much, but please don’t forget about me and the other American Detainees. Please do all you can to bring us home,” Griner wrote. “I voted for the first time in 2020 and I voted for you. I believe in you. I still have so much good to do with my freedom that you can help restore.”

Griner admitted guilt at her last hearing but told the court that she had not intended to commit a crime, state news agency RIA Novosti reported.

Samples taken from Griner did not show any traces of drugs, Boykov added: “She was clean, and she was tested.”

It was Griner’s decision to plead guilty, her legal team said, adding that she “sets an example of being brave.”

“She decided to take full responsibility for her actions as she knows that she is a role model for many people,” their statement read.

“Considering the nature of her case, the insignificant amount of the substance and BG’s personality and history of positive contributions to global and Russian sport, the defense hopes that the plea will be considered by the court as a mitigating factor and there will be no severe sentence.”

The 6-foot-9 Houston native is one of the most decorated players in basketball. In addition to Griner’s Olympic gold medals, she has won two world championships, a WNBA championship and an NCAA championship. She has twice been crowned the WNBA’s scoring champ and the league’s defensive player of the year, and was voted onto seven all-star teams before her detention. She was named an honorary all-star in this year’s contest earlier this month.