Biden walks a political and diplomatic tightrope in Saudi Arabia 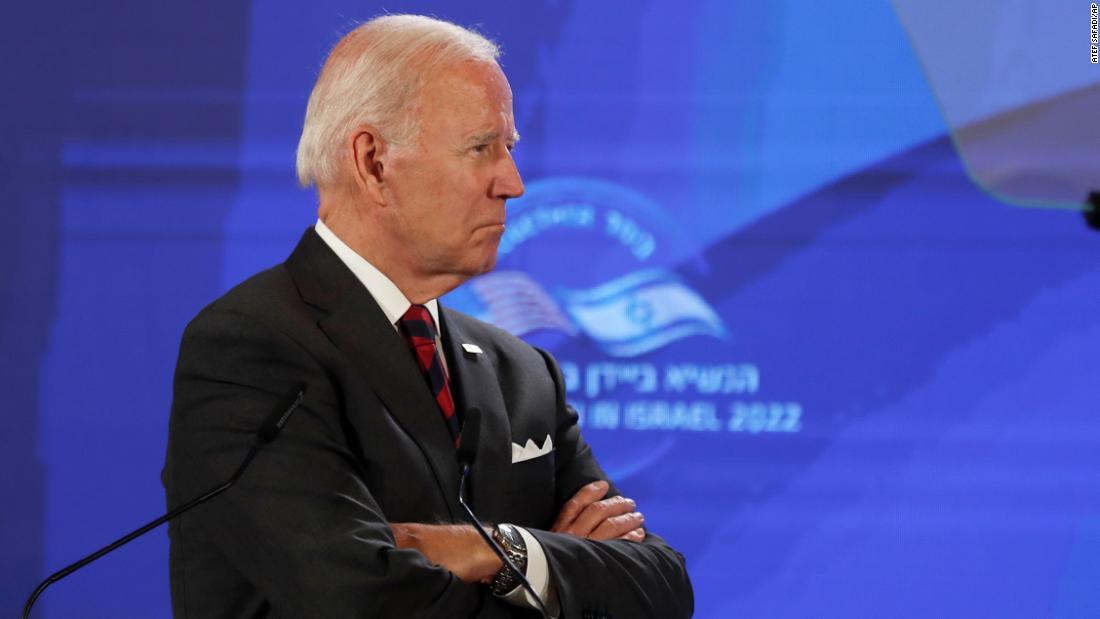 If the President leaves without securing a significant injection of crude into the global market, he risks more political damage at home, where Americans are taking out their frustrations with high gas prices on him. But if he succeeds, he will further anger human rights advocates who accuse him of ditching US principles for short-term political gain. In either case, Biden must find a way to justify his opening to the Crown Prince, Saudi Arabia’s erratic and repressive de facto leader who was blamed by US intelligence for ordering the murder and dismembering of Washington Post columnist Jamal Khashoggi, a US resident and Saudi dissident.

Biden has, after all, put democracy promotion at the center of his foreign policy agenda while bin Salman has presided over the execution of political prisoners, launched a vicious war in Yemen, which has killed thousands of civilians, and was accused of detaining Lebanon’s prime minister in another regional power play.

“The reason that I’m going to Saudi Arabia … is to promote US interest … in a way that I think we have an opportunity to reassert what I think we’ve made a mistake of walking away from: our influence in the Middle East,” Biden said Thursday.

The President is ostensibly going to Saudi Arabia to take part in a regional conference also with leaders from Bahrain, Kuwait, Oman, Qatar, the United Arab Emirates, Egypt, Iraq and Jordan. He is seeking to cement recent progress in a rapprochement between some of these nations and Israel where he spent the last few days. He’s also keen to build support for his drive to use diplomacy to revive a 2015 nuclear deal before Tehran enriches sufficient uranium for a nuclear bomb — a diplomatic process about which both the Israelis and the Saudis are skeptical.

And Biden has a strong interest in reasserting America’s leadership as its great power rivals Russia and China seek new inroads in the region. So the President’s claim, that it is now in US interests to reengage with Saudi Arabia after the 2018 Khashoggi killing severely strained relations, does have merit — even though he’s taking heat from progressives in his party for doing so.

With his visit, the President, who vowed to make the Saudis a “pariah” on the campaign trail in 2020, is experiencing a rite common to commanders-in-chief who have to sometimes dilute their own political interests for a wider strategic goal.

“How do we balance our interests in the free flow of oil at reasonable prices with our values,” asked former US ambassador to Israel Martin Indyk on “Amanpour” on CNN International this week, encapsulating Biden’s dilemma.

“Somehow, the President has to walk the line. We need the Saudis to increase oil production to bring the price down because that is having a terrible impact on inflation. On the other hand, we need to take a clear stand against the way (Mohammed bin Salman) treats some of his people some of the time.”

The distasteful aspect of this trip is that there is no way for Biden to accomplish his goals without elevating bin Salman, who is the dominant figure in the Saudi royal family and will use the visit of an American President to rehabilitate himself globally and to send a message to other strongman-ruled states that there is no longterm price for acting in a way that offends American values. He may, therefore, not feel especially beholden to offer wide-ranging concessions.

The White House confirmed for the first time late Thursday that Biden will meet with the Crown Prince without King Salman, who will depart after about 30 minutes of the bilateral meetings, which was expected because of his health. The administration’s shifting positions on whether and how Biden would interact with the Crown Prince in recent weeks have appeared to whip up even more controversy about the visit. In retrospect, an earlier announcement and a strong statement about what the President would do and say might have eased some of the political pressure.

Still, Biden argued in a recent Washington Post op-ed that the broader aspiration of using his trip to promote regional stability was important since it could prevent the conflicts that led to US troops having to fight and die in the Middle East for decades. Biden — whose worldview was shaped by his own experiences and that of his late son Beau, who served in Iraq — has put avoiding new foreign wars at the center of his presidency. This is also one reason why he is committed to trying to revive the Iran nuclear deal, which could head off a fateful decision on whether he might use military force to prevent Tehran from getting a nuclear weapon.

Why does the US have an alliance with the Saudis?

The question of balancing US principles and national interests was bound to resurface for Biden sooner or later in relation to the Saudis because it has been a constant theme of US relations with the kingdom for over half a century. Saudi Arabia, for instance, has long been a key strategic US ally, but its tolerance for radical Wahabi Islam provided a fountain of extremism in which terrorism grew and eventually led to events like the September 11 attacks in 2001.

That is why some foreign policy observers have questioned whether there needs to be a complete rethink of the marriage of convenience between Washington and Riyadh and the idea that the two powers really do have common interests. This was not a concern during the transactional presidency of Donald Trump, who blatantly explained that he was not severing relations over the Khashoggi killing, because the Saudis bought lots of American-made weapons. But that interregnum from long-term US foreign policy certainties aside, Presidents have long wrestled with the proper balance of US-Saudi relations. But they have always been drawn back to the kingdom because of the vital importance of the free flow of oil for the US economy, living standards and their own political survival.
Democratic Sen. Chris Murphy of Connecticut said on CNN’s “The Situation Room with Wolf Blitzer” on Thursday that the question of whether Biden would shake the hand of bin Salman was irrelevant. Instead, the Saudis need to show a commitment to changing their behavior on human rights and demonstrate their loyalty to Washington, he said.

The trip comes at a moment of political peril for Biden, with his approval ratings tumbling while inflation soars and after a period of record gasoline prices, which have moderated slightly in recent days. From a purely political perspective, the sight of a President engaging with oil-producing nations to ease prices back in the United States may be welcome to some voters. But if his visit doesn’t result in significant production increases from Gulf states, or if the move fails to ease gas prices that helped power inflation to a more than 40-year-high of 9.1% last month, the President will face claims he misused the prestige of the presidency and trashed his principles on human rights for no gain.

And one concern for the administration is that there is no guarantee that more oil on the market will lower gas prices — sent racing higher by the war in Ukraine — permanently. This is because one of the issues in the industry has been a scarcity of refining capacity coming out of the pandemic — a situation a sudden flood of crude could actually exacerbate.

A trip to the region that doesn’t produce clear wins for the President could add to perceptions of a presidency that is losing direction — even if Biden’s foreign policy, especially his revival of the Cold War coalition of Western nations to confront Russia over the invasion of Ukraine, has been largely successful.

The brutal murder of Khashoggi has become a metaphor for wider US concerns about human rights in Saudi Arabia, which include the fate of political prisoners, summary executions, the treatment of women and the disregard for civilian life in Yemen.

The President appeared tetchy at a news conference in Israel on Thursday when he was pressed over whether he would raise the case of the Washington Post journalist when he was with bin Salman.

Lina al-Hathloul, a Saudi democracy activist, told CNN’s Jake Tapper on Thursday that it would be a “betrayal” if Biden didn’t bring up US concerns about Saudi Arabia’s human rights record. Human rights organizations have called on Biden to meet political dissidents while he is in Saudi Arabia, a step some past presidents took when doing business with totalitarian regimes. So far there has been no announcement from the White House of any such contacts