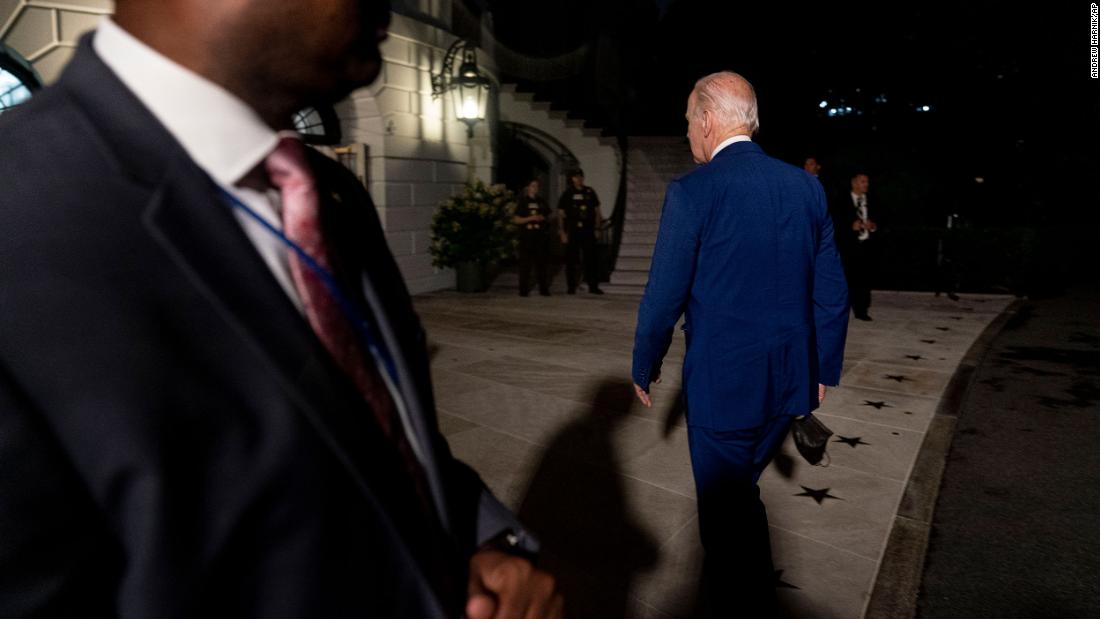 Biden’s aides say he often uses the return flight from abroad to discuss with exhausted staffers the domestic items that are next on his list. A week ago, that would likely have included renewed attempts to pass the sweeping social safety net and climate bill he’s been pushing for more than a year.

“He had so many hopes and plans for things he wanted to do,” first lady Jill Biden told Democratic donors on Nantucket this weekend while her husband was overseas. “But every time you turned around, he had to address the problems of the moment.”

It is a sentiment shared widely in the West Wing and among Biden’s Democratic allies, many of whom view the past year — beginning with a resurgent Covid-19 after Biden declared “freedom from the virus” followed by the messy and deadly US withdrawal from Afghanistan — as one crisis after another.

A set of decisions — including whether to ease some tariffs on China and addressing student loan debt — have been put off, but are likely to come due in the next several weeks after months of deliberation, internal disagreement and, according to some officials, delays by Biden in making up his mind.

Meanwhile, as Republicans appear poised to win the House majority, Biden’s legal team continues to prepare for what they expect will be an onslaught of oversight investigations from a newly powerful GOP.

Biden was in a punchy mood when he returned to the White House just before midnight this weekend, chiding a reporter who asked him if he regretted fist-bumping Crown Prince Mohammed bin Salman.

“Why don’t you guys talk about stuff that matters? I’m happy to answer a question that matters,” he said, holding his hand over his eyes to shield them from a bright spotlight.

It was the most recent in a string of testy replies Biden has given lately to questions about his decisions or political standing.

He told a reporter standing on the beach in Rehoboth, Delaware, she sounded “like a Republican politician” for asking about economic experts who predict a recession. And he tartly dismissed a question in Saudi Arabia about whether he could be sure an incident like the 2018 murder of Washington Post columnist Jamal Khashoggi wouldn’t be repeated.

“God love you, what a silly question,” the President said.

On the day he left for the Middle East, Biden was departing a festive congressional barbecue on the South Lawn when a reporter asked what his message was for Democrats who don’t want him to run again.

“They want me to run,” Biden said, walking over to him. “Read the polls. Read the polls, jack. You guys are all the same. That poll showed that 92% of Democrats, if I ran, would vote for me.”

Biden’s familiarly with the New York Times/Siena College poll released last week was hardly surprising, even though he once claimed he didn’t believe polling about his approval ratings. The survey showed nearly two-thirds of Democratic primary voters would prefer another candidate to Biden in 2024, though it also showed a close race between him and former President Donald Trump in a potential rematch.

Concerns among Democrats over Biden’s leadership — and, increasingly, his age — have become louder over the past weeks. Runaway inflation has caused some Democrats to distance themselves from the White House, which has struggled to contain voter anger.

“I have said for a while that I thought he and the administration have been too slow to react to it,” Sen. Maggie Hassan, a vulnerable New Hampshire Democrat up for reelection this fall, told CNN’s Manu Raju this week. Asked if she would support Biden in 2024, Hassan said: “If he runs, I’ll support him.”

Rep. Elissa Slotkin, a Democrat from a competitive Michigan district, said inflation and the economy “should be the start of every press conference at the White House and every other relevant department and agency.” She said attempts by some senior Democrats to downplay or project an end of inflation were being poorly received among voters.

“I’m from Michigan,” she told Brianna Keilar on CNN. “We’re just kind of straight about what’s going on and I think people can feel and see spin, and I don’t think they like it.”

Jared Bernstein, a top White House economic adviser, said in a CNN interview Sunday that gas prices declining for the past month was an achievement worth touting.

“If we’re going to talk about the damage that these high energy prices are having on family budgets, I think we have to talk about the benefits for when those prices come down a little,” he told Dana Bash on “State of the Union.”

Still, he acknowledged the roughly 47-cent-per-gallon reduction from a month ago wasn’t likely to register for many Americans.

“The President is unequivocal by not calling mission accomplished on any of this. We’re talking about a decline that’s completely insufficient when it comes to delivering the relief to family budgets that they need.”

Democratic frustration with the White House on abortion and guns

It’s not only inflation where Biden faces blowback from fellow Democrats. His cautious response to the Supreme Court decision wiping away the nationwide right to abortion has been lambasted by progressives, who were dismayed as the President and the White House ruled out options like trying to expand the high court or allowing abortions to be performed on federal property.
Some Democratic activists were also enraged when it emerged Biden had plans to nominate an anti-abortion Republican as a federal judge in Kentucky, part what sources described as a potential deal with Senate Minority Leader Mitch McConnell, who represents the state. Last week, the White House said it had scrapped the plan, citing opposition from Kentucky’s other Republican senator, Rand Paul.

Biden did sign an executive order before going abroad aimed at protecting access to abortion. But many of his allies have pushed him to do more, including declaring a public health emergency — a step some officials view skeptically.

“I think that there’s more that we can and must do in this moment, especially where women in states like mine are in crisis,” Democratic Rep. Lizzie Fletcher of Texas told CNN’s Poppy Harlow last week.

On guns, too, Biden is under pressure to do more. While a signing ceremony last week for the first piece of major gun legislation in the past several decades was a moment to celebrate, it was briefly interrupted when a father whose son was killed in the 2018 Parkland mass shooting stood in protest.

“We have to do more than that,” Manuel Oliver shouted. “I’ve been trying to tell you this for years!”

On abortion, guns and other issues — including taming inflation — Biden and his aides point out their options for acting through executive power are limited, and suggest some proposals from fellow Democrats wouldn’t hold up in court.

Biden did say this week he was prepared to take executive action to address climate change after Manchin torpedoed what had been another attempt at passing new clean energy spending, along with tax hikes on the wealthy, citing concerns over inflation.

It was a discouraging, but for some administration officials not entirely surprising, outcome. Attempts at courting the West Virginian, including a rare invite to Biden’s Delaware home for breakfast last fall, had previously resulted in similar disappointments. This time, administration officials left the negotiating to Senate Majority Leader Chuck Schumer — and many felt their skepticism confirmed after Manchin’s announcement last week.

Still, it was a seemingly decisive blow to the sweeping legislative ambitions Biden entered office hoping to achieve. While Manchin says he is open to another look once new inflation numbers are released next month, the window for passing even a scaled-down version of the President’s agenda is rapidly closing.

Even Biden, who describes himself as a “congenital optimist,” told reporters in Saudi Arabia he had “no idea” whether Manchin was negotiating in good faith.

As he returned to a quiet White House late on Saturday night, Biden offered about as much optimism as he could muster when asked if inflation would start going down.

“I’m hoping,” he told reporters gathered in the dark.