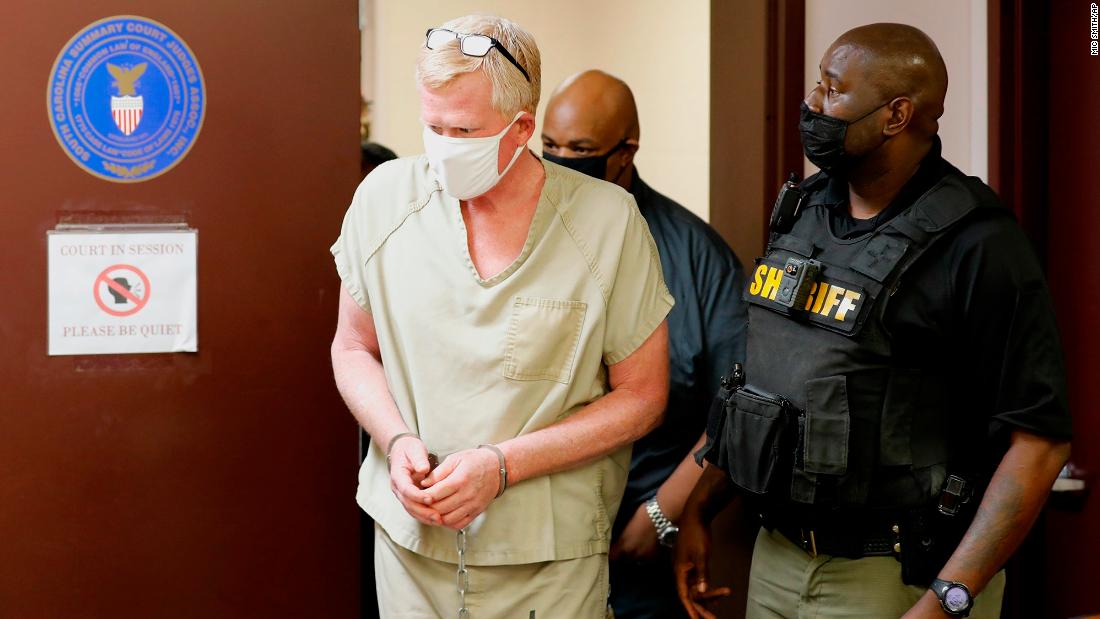 The plea comes nearly a week after Murdaugh was indicted by a Colleton County grand jury on two counts of murder and two counts of possession of a weapon during the commission of a violent crime in connection to the deaths of his wife, Margaret “Maggie” Murdaugh, 52, and their youngest son, Paul Murdaugh, 22.

Wednesday’s hearing was slated as a bond hearing, but Murdaugh and his attorneys requested a formal arraignment. Asked if he was guilty or not guilty, Murdaugh — who appeared in the Walterboro courtroom with a shaved head wearing a white linen shirt and khaki pants belonging to his attorney’s son — responded, “Not guilty.”

The prosecution and defense told the judge they consented to a gag order and the sealing of discovery items, due in part to the media attention the case has drawn. Dick Harpootlian, one of Murdaugh’s attorneys, said the gag order request was prompted to prevent tainting a potential jury pool.

Newman, who said he typically disfavors gag orders, indicated he would consider the request. Harpootlian will submit a formal request in coming days, he said, at which time the judge could rule.

“It’s a public matter and a public trial, and certainly matters that need to be sealed can be sealed to preserve the rights of all parties,” said Newman.

“The court understands that but, at the same time, wants to make it clear we will not have any private motion. Public matters will be public,” he added.

Maggie and Paul Murdaugh were found dead the night of June 7, 2021, after Murdaugh called 911 to report he had discovered their bodies at the family’s property in Islandton, South Carolina.

He has denied involvement in their deaths, saying he was visiting his mother at the time they were killed.

The murder charges are just the latest — though by far the most serious — brought against the now-disbarred attorney, who also faces charges connected to alleged financial crimes.

Altogether, the saga has gripped the state as accusations pile up against the scion of one of the state’s most powerful political families. Over three generations, a member of the Murdaugh family served as solicitor of the 14th Judicial Circuit, which oversees prosecutions for several counties across a swath of the South Carolina low country.

Indeed, in the courtroom where Murdaugh appeared Wednesday, a portrait of his late grandfather, one of the solicitors, was hanging on the wall.

Attorney: Murdaugh believes ‘killer or killers are still at large’

Murdaugh’s attorneys Wednesday requested a speedy trial that would begin as early as October or November, though the state indicated January would be more reasonable.

Murdaugh wants the trial to begin quickly, Harpootlian said, because he believes his wife and son’s “killer or killers are still at large.”

Though no new details linking Murdaugh to the murders were revealed in court Wednesday, prosecutor Creighton Waters characterized the evidence against Murdaugh as “substantial.”

“Much of the information that has been gathered in the state grand jury case — all of the 81 allegations of white collar fraud and other crimes, drugs and the like — that has been gathered against Mr. Murdaugh over the course of that long investigation … a lot of that provides the background and the motive for what happened on June 7, 2021,” Waters said.

Blood spatter found on Murdaugh’s clothing could place him at the scene of the killings of his wife and son, in close contact with at least one of the victims when he or she was killed, a source with knowledge of the investigation previously told CNN.

High-velocity spatter is associated with the use of a particular weapon, like a rifle, and it creates a specific pattern, especially at close range.

The details were first reported by FITSNews.

Investigation prompts one twist after another

Murdaugh was already being held in Columbia on a $7 million bond for other alleged financial crimes tied, in part, to allegations the once-prominent attorney stole millions in death settlement funds from the family of his late housekeeper Gloria Satterfield.

South Carolina authorities opened an investigation into Satterfield’s death last year after questions emerged about her death and how it was handled. The housekeeper died at the Murdaugh’s home in 2018 in what Murdaugh described as a “trip and fall” accident.

According to the South Carolina Law Enforcement Division, Murdaugh coordinated with Satterfield’s family to sue himself and reach an insurance settlement, saying he would give the family the proceeds. But he secretly deposited about $3 million of that money into an account he owned, per affidavits released by SLED.

It’s just one of the twists prompted by the Murdaugh saga: Authorities also reopened the investigation into a 19-year-old’s unsolved death in 2015; Murdaugh resigned as an attorney for a prominent legal group; he admitted he struggled with opioid abuse; and he faces dozens of charges accusing him of stealing money from clients.

Many of these developments surfaced following an incident last September, when Murdaugh called police to report he was wounded by a gunshot to the head. He soon admitted he had conspired with another man to fatally shoot him so his surviving son would collect a $10 million life insurance payout, according to court documents.