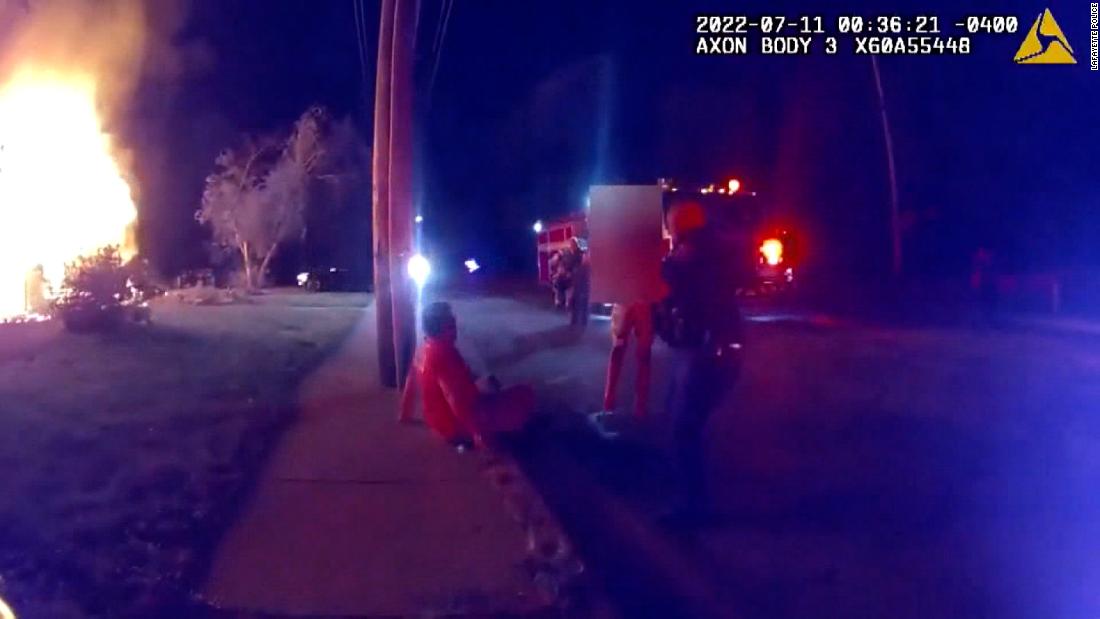 Nicholas Bostic, 25, was driving in Lafayette, Indiana, just after midnight on July 11 when he saw a house on fire, according to a news release from the Lafayette Police Department, and pulled into the home’s driveway.

Bostic was able to enter through a back door that was open and began to check if there was anyone in the home, according to the release. As he went upstairs he found four children — ages ranging from one to 18 years old — asleep and woke them, helping them escape the home.

Once Bostic was able to get the children out of the house, he learned that a fifth child, a six-year-old girl, was still inside. Heading back in, he searched for the girl and when he heard crying, ultimately located her, police said.

Bostic was not able to find a way out on the main floor as the flames intensified, police said, and the two would be forced to jump out of a second-floor window to safety. Bostic had to break the window with his hand to get it open, the release said.

“I did try to find the back door, but I couldn’t find it and I didn’t want to get too lost,” Bostic told CNN affiliate WLFI.
Lafayette Police Department posted dramatic video on social media showing the moment firefighters arrive at the home, and Bostic is later seen walking from the flame-engulfed home with the girl in his arms. As he approaches fire department personnel, he hands the girl to the firefighters and sits on the ground.

“Is the baby, ok? Please tell me that baby is ok,” Bostic asks as he is being treated. A police officer confirms and tells him, “You did good, dude.”

Bostic was seriously injured during the rescue, according to authorities, suffering from smoke inhalation and deep cuts on his right arm. The girl “was miraculously mostly uninjured,” according to the release.

Bostic told WLFI he has a possible severed tendon in his arm. “The bottom of my hands are blistered like I grabbed something hot. I recall seeing flames through the window as I was punching it out,” he said.

A spokesperson for Lafayette Police told CNN the family is doing well and has since met with Bostic at a friend’s house and at church. The parents had left for the evening and the 18-year-old was with the children, police say.

“Nicholas Bostic’s heroic actions saved lives,” Lafayette Police said in the statement. “His selflessness during this incident is inspiring, and he impressed many with his courage, tenacity, and steadfast calmness in the face of such perilous dangers.”

A GoFundMe has been established by Bostic’s family to help with his medical bills.